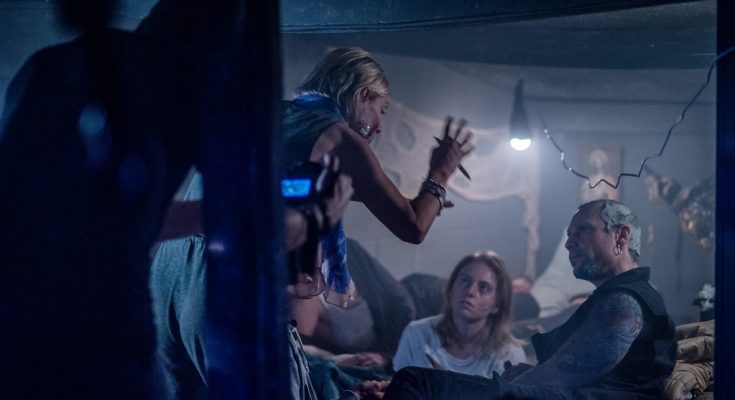 Elizabeth Blake-Thomas, a British award-winning filmmaker and philanthropist, is already highly regarded for writing and producing her own films, often with her daughter, Isabella, working alongside and taking a prominent acting role.

In a break from the norm, Elizabeth’s latest project is the launch of a film trilogy and essentially, a ‘horror film for children’, in which the lead character heads-up the search for an ancient pendant. Making its premiere on 10th December, the first part of the new trilogy, entitled ‘The League Of Legend Keepers’, is aimed at a much younger audience than most horrors, with the target audience being just 6-12 years old.

In addition to her pedigree as a talented female producer and writer, Elizabeth is a strong advocate for many other women in the film industry, not just through her words, but also her actions.  She always likes to ensure that her film crew involves as many women as possible and she has already gone on-record stating her commitment to achieve a strict 50:50 women to men cast and crew policy; which although not always practicable, is a passionate desire running throughout all new projects where she has this ability to influence.

Knowing that Elizabeth is a big supporter of women in film, her exciting new ‘child’s horror’ trilogy presents us with a dynamic, courageous female character to identify with: almost a young ‘female Indiana Jones’ – someone that can ‘save the world’ with the help of her friends and whatever she might have in her garage!

Beneath the compelling ‘adventure’ story theme, the film is really about having true friendships and showing how, as a team, amazing things can be achieved. The film teaches its audience how to stand up to a bully; not by fighting back, but by believing in yourself and showing that through your actions you can stand up for friends who also might be being bullied. Without giving too much of a spoiler-alert, the situation then escalates and it isn’t long before the bullies end up realising they were wrong;  so do they end up supporting the young girl? Watch for yourself!

The motivation to create this new film series was a very personal one for Elizabeth. As the mother of a young adult, author and director, she wanted to have something for her daughter to watch at Halloween that was age-appropriate. Although she took time out to research it, there just wasn’t anything suitable, with a strong positive message so she decided to write one herself.

In this first film Sophie, a young girl, moves to a new town and finds a best friend who is a geeky scientist. He is getting bullied and Sophie stands up to the protagonists, but not before a bigger force is released into town through an old myth. As a complex and intriguing storyline develops, Sophie and her best friend, together with the bully, ultimately have to decide whether to work together to save the town from a new threat in the form of a dark evil force.

This film is the first of a trilogy so it would be wrong to give away too much of what lies ahead, but be prepared for some intense drama as Sophie and other members of the league return in the other films, with some dramatic twists.

Isabella Blake-Thomas stars in the film as a lead role Sophie (actress known for ‘Once Upon A Time’ TV series, Disney+ movie ‘Secret Society of Second Born Royals’, ‘Game Shakers’. Actor Richard Tyson is from ‘Kindergarten Cop’, Gabe Eggerling from the ‘Kicks’ and Jake Brennan from a number of ‘Nickelodeon’ and other projects.

The film was shot in Los Angeles and includes lots of original music, which is particularly notable as the film’s key audience is 6-12 year olds. It’s being released on both DVD and VOD, in addition to the usual range of digital media from December 10th.

Elizabeth’s next projects include “Evie Rose”, the story of an inspiring friendship, ‘The Cabin’ starring Rob Mayes and ‘Girlband vs Boyband’ and ‘League the Return: Timemachine’.

Previous PostJana Holkova appears in "Girl Gone: Or Before A League of Their Own" play Next PostInternational Theatre Artist Tara Bruno Showcases ‘CYCLE-LOGICAL’ at Tron Theatre