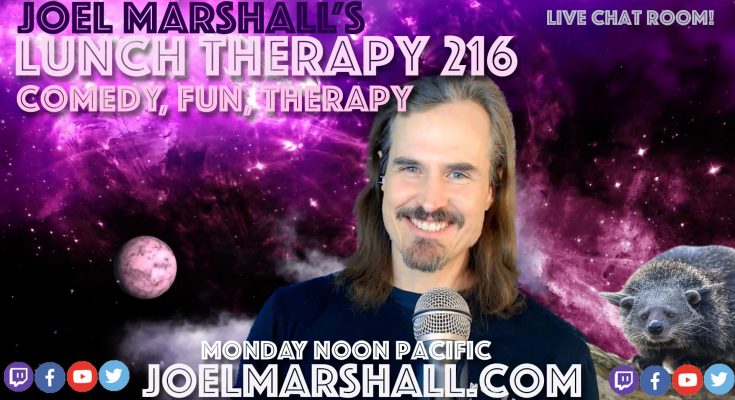 Comedian and actor Joel Marshall’s popular web show ‘Lunch Therapy’ sees him talking to famous faces from the worlds of film, music and comedy. His guests have included actor Judd Nelson and director James Foley. He’s also known for his role as William of Huxley in ‘The New Adventures of Robin Hood’. He tells us how ‘Joel Marshall’s Lunch Therapy’ was born out of the adversity of the pandemic, the fascinating Hollywood conversations it’s sparked, and how excited he is about his latest acting roles.

How did you get started in the entertainment industry?

“I grew up in Seattle, Washington, and was inspired by the work of actors like John Malkovich, Joan Allen and Gary Sinise. When I found they all came from Steppenwolf Theatre in Chicago, Illinois, I just up and moved there! I told the box office guy that I had come to work at Steppenwolf, and he replied that it could never happen because all the jobs had to be covered by ensemble members. In fact, John Malkovich himself had done costuming on the previous show. Dejected, I left my number and told them to call me if they needed me. That same night I got a call: the box office guy that had turned me down had quit! I worked at Steppenwolf for two years learning what it takes to be in the professional entertainment industry, be it on stage or screen.”

What have been your favourite film and TV projects to date?

“One of the best experiences I’ve had as an actor was working on ‘The New Adventures of Robin Hood’, an adventure show in the same vein as ‘Xena: Warrior Princess’. It was a fantastic international cast, with stunt performers from Russia. I’ve also worked on indie films ‘Fort McCoy’; ‘Tammytown’ and ‘A Single Woman’ – about the life of first US Congresswoman Jeannette Rankin. I write and produce films, too, including the short ‘Dark Knight Aurora’, a reaction to the Aurora, Colorado mass shooting, where I play Batman; ‘Coffee Clutch’, as a murderous agent opposite the great actor Miguel Sandoval; and the award-winning feature documentary ‘Equal Means Equal’.”

“Before the pandemic hit, I was doing stand-up comedy at the biggest clubs in Hollywood, but when the town completely shut down, I realised I needed to find a new way to perform. On 13 March 2020, I began live-streaming to YouTube from my garage. The show took place at noon every day for the first few months. I called it Joel Marshall’s Lunch Therapy, because not only was it keeping me sane, it was helping other people through very difficult and strange times. Soon, my friends and fellow comedians were tuning into the show live and participating through the chat. As the show evolved, I started Interview Fridays, similar to my podcast FatFreeFilm. I talk to people I find interesting: comedians, actors, directors, artists, activists. I also like to show animals, ASMR, science, sketches, spoof commercials, and anything else that makes people happy and inspires them. I now broadcast live on Tuesdays and Fridays and I’ve done over 320 episodes to date.”

What are the most interesting guests you’ve welcomed onto ‘Lunch Therapy’?

“The director James Foley talked about when Sean Penn used to sleep on his couch, how they met Madonna, and then made the film ‘At Close Range’ with Christopher Walken. Actor Richard Lawson inspired us with his story of surviving a commercial jet plane crash in the icy Potomac River. Judd Nelson spoke of his experiences making the classic film ‘The Breakfast Club’. Martina Wing of Manta Ray Advocates told us about how she guides people on night swims in Hawaii with Manta Rays. I’ve also been pleased to reconnect with some of Steppenwolf’s great artists, such as Tony winners Rondi Reed and David Cromer.”

How can people follow you, and what have you got lined up for the future?

“Please subscribe to Joel Marshall’s Lunch Therapy YouTube Channel! Join our live shows Tuesdays and Fridays at noon Pacific time, and check out previous episodes too. And at the moment I’m appearing in ‘Brothers Inc’, by Tom Kearney, which is winning awards on the film festival circuit. Coming soon, I’ll be seen in the film ‘An Unwritten Rule’,where I play the lead juror in a controversial case on race in America.”