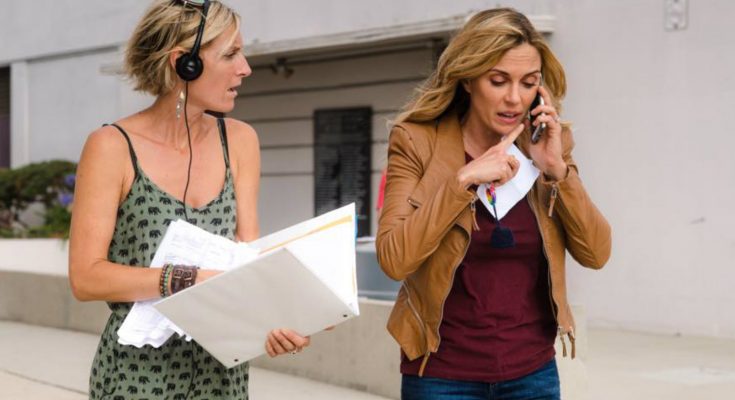 Award-winning film director, Elizabeth Blake-Thomas is doing it all. The LA-based British filmmaker is writing, directing and producing the short film “Unseen”, about the dangers of social media and human trafficking. Elizabeth, who is also the BAFTA patron, empowers women in the film industry by ensuring every one of her sets has a 50/50 female crew. She ensures her stories have female characters for police or teachers or other roles that one might not naturally see as being the traditional place for a woman.

Preparing film for a bid to the Oscars

The film is shooting in early May in the Los Angeles area. The film is being co-produced by Elizabeth Blake-Thomas with ‘Mother & Daughter Entertainment’, Mal Young (BBC and “The Young and the Restless”) Francis O’Toole with Mercury Pictures and Hermann Briggs with SteelStrong Productions.

The project I’m currently working on with Rhyon Brown and Isabella Blake-Thomas is super under-wraps, but what I can say is that it’s a heartbreaking subject matter. The other actors in the movie are all incredibly talented and I’ve learnt so much while on set. I’ll be able to talk about the project once it’s announced on ‘Deadline and The Hollywood Reporter’ which should be in the next few weeks. The film will be submitted to festivals in the surrounding area in the hope of being considered for a bid to the Oscars. It will also be submitted for ‘Reframe’ consideration, as both cast and crew are at least 50% female.

Her daughter, “Once Upon A Time” star, Isabella Blake-Thomas, who stars in the film, is already a successful and hardworking actress from an early age. She worked with everyone from Jon Voight to Gillian Anderson to Rosamunde Pike, Rowan Atkinson, Kelly Lynch, and Cameron Bright as well as well-known child stars on Nickelodeon shows. Isabella also played the role of Izzie in “Johnny English Reborn” which she was really excited about: “From a very young age I’ve loved Mr. Bean, so getting to meet him and work with him was a dream come true. He’s such a talented actor that I learnt so much about comedy from just by watching him on the set of “Johnny English Reborn”. Rosamund Pike was a sweetheart. I actually bumped into her the other day at the BAFTA Golden Globes tea in LA and we were able to catch up. She is also incredibly talented and I’m really happy that I got to work with her and now I get to see how far her career has come over the years”.

Isabella about her mum Elizabeth

Isabella also spoke about her daughter-mum work relationship: “Working with my mum is phenomenal. We are always on the same wavelength and I know what she’s going to say before she says it. Our projects are so much fun to work on together because we both want what’s best for the movie, meaning we both work so hard to make sure the end result is as good as it can be. Our production company, Mother & Daughter Entertainment, is 100% a family. Not just me and my mum but all the crew that work with us.”

Isabella also stayed in touch with Rebecca Mader, also known as “Zelena” from the “Once Upon A Time” TV series: “the show has been my favourite TV show for ages and I remember trying to figure out who I could play in the show. Then one day, I got the audition through for Young Zelena and I was overjoyed. I dyed my hair red that same day and went straight to the audition. I was over the moon when I got the role on the show because I was going to get to meet all my favourite cast members. Meeting Rebecca was really surreal because I had been so used to watching her on my computer that it took me a second to process that I was looking at Bex and not Zelena. She was so kind and welcoming and she and all the other cast on set made me feel like part of the family; I will be forever grateful for that. Ever since ‘Once Upon A Time’, I’ve stayed in contact with Rebecca and now we meet up in LA when we’re both free and it’s a blast catching up.“

Single mum doing it all

As a single mum, Elizabeth can relate even more and understand the story “Unseen” which also talks about a single mum, struggling to get by and her good-intentioned daughter Carly. Carly sees an advert for a modelling job on social media; drawn-in by the promise of lots of money, she takes the chance. Little does she know it is all a trap. Focusing on the aspect of normality surrounding the human trafficking “game”, we see the world collapse around Carly’s mum as she deals with the pain of losing her daughter. “It can happen to anyone, and that’s what I wanted to show,” says Blake-Thomas. “I want parents to be left thinking that they need to monitor their children’s social media. I know that I do.”

The film was inspired by real events in a small town in Utah. The charity ‘Go global or stay local’ initiative founded by Soul Central magazine, which supports human trafficking victims and spreads awareness about it, reached out to Elizabeth with the project and she happily accepted the challenge. She researched and wrote the script and will also be directing and producing the film. She is truly doing it all.