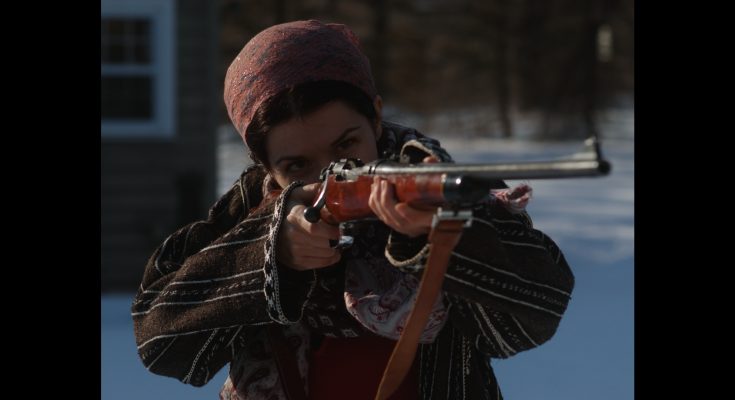 Behind the scenes of creepy new horror film ‘Schimbarea’

‘Schimbarea’ is about Gordon, an American drifter who arrives in a rural Romanian village, steals something to eat and is put under a curse. Then even weirder things begin to happen…

The story starts when Gordan, who has been away from home for a long time, runs out of money. He contacts his father, but he refuses to help him out. Gordon takes a taxi, but when the taxi driver realises he’s broke, he kicks him out onto a cold Romanian road. Gordon comes to a cottage where he sees a young woman called Zulema, who is living with her grandmother Olga. As the young couple falls for each other, they enter into the strange, surreal world of the supernatural.

‘Schimbarea’, which means ‘change’ in Romanian, is the first feature film for executive producer Victor Girone’s company PitchPointFilms, which he set up to make bold and original movies.

The writer and director Patrick Corcoran had worked on the script with co-writer and first assistant director Aiden Karstadt for three months, before sending it over to producer Jen Emma Hertel. Corcoran had spotted Hertel on TV being interviewed for an indie film she made last October. From there, Hertel reached out to her producing partner, Girone, who greenlit the project.

The cast includes bilingual French actress Sarah Bonrepaux as Zulema, along with Billy Brannigan as Gordon. The film was set in the fictional town of Ghimlia, Romania but filmed in the US. Hertel said: “We couldn’t have pulled this off in the USA if it wasn’t the Paradise Farm location located in West Bend, Wisconsin – the home was built in 1840 and it also has a beautiful barn, chickens and sheep, and hiking trails.”

Everyone had to follow Covid protocols, with the cast and crew getting tested every three days and their temperature checked every morning. People stayed in their bubbles, used gloves and hand sanitiser, and a CCO (Covid Compliance Officer) kept on top of it all. “It was a challenge with an indie-film budget, but if the whole team is on the same page with the new protocols, it goes swimmingly,” said Hertel.

Everyone involved with the film loved making it. Stunt Coordinator Matthew Muzio said: “I’ve been on sets before with my cousin, (director, screenwriter and producer) David O. Russell, and it’s great to see the indie filmmaking spirit in ‘Schimbarea’.”

Actress Sarah Bonrepaux enjoyed the experience too. She said: “Where to begin about ‘Schimbarea’? It was the most challenging, exciting and rewarding experience ever. To be able to portray such a compelling and layered female character is so rare, and I am deeply grateful that Patrick and Aidan trusted me enough to give me this opportunity.

“I fell in love with Zulema the minute I read the script, and the more I worked on this project, the more I felt connected to her. I was so lucky to share this journey with such a generous and incredible partner on the screen (Billy Brannigan). We trusted each other from the very beginning and we both committed to putting out everything we could to bring these characters to life.

“Being able to just be in the moment while filming was so thrilling and inspiring. Every scene was a surprise and it definitely changed my perspective about acting. Having such a hard-working and respectful crew around us was also a tremendous help. Because of their dedication and positive energy, I felt confident and safe enough to allow myself to dive into the work every day. I hope people will love Zulema as much as I loved becoming her.”

Hertel now has another film in the works for PitchPointFilms, and Girone says: “We are actively looking for scripts to greenlight as well.”

The trailer for ‘Schimbarea’ will be available in April, and the film will be released later this year.

Previous PostDodging bullets to make a film: an interview with the director of 'Kabullywood' Next PostProducer Gabriel Gornell on his most memorable moments in film and TV