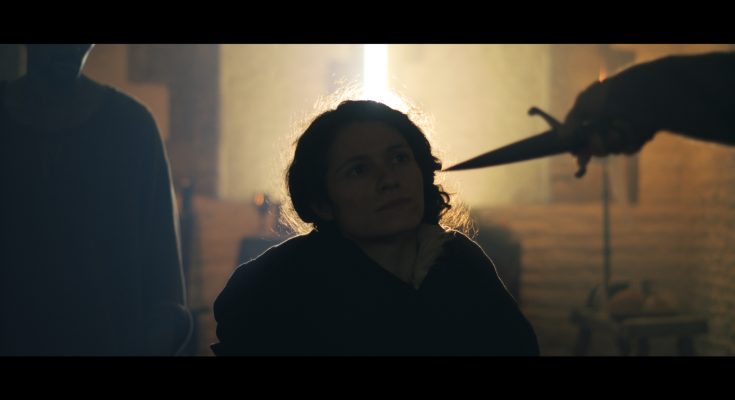 By Hollywood Stage MagazineComments Off on Audrey L’Ebrellec stars as Laudine in ‘Arthur & Merlin: Knights of Camelot’

‘Arthur & Merlin: Knights of Camelot’ stars Audrey L’Ebrellec as Laudine, showcasing her formidable stage combat skills. She appears alongside Richard Short (‘Mary Kills People’) as King Arthur and Richard Brake (‘Kingsman: The Secret Service’, ‘Game of Thrones’) as Merlin. The film is released on DVD on 13 July and can be pre-ordered on Amazon.

London-based French actress Audrey L’Ebrellec’s character Laudine is a deadly warrior on a mission to kill King Arthur. She is driven by a sense of revenge and justice and will do anything to fulfil her quest. Audrey said of her experience working on the film:

“I got on so well with all the cast; it was truly magical. I was very sad when I had to leave everyone, but most of all I was devastated to give back my costume. I just loved it so much.”

The part of Laudine required a good knowledge of stage combat training and also a British accent, which Audrey spent weeks practising. She was already trained in broadsword and knife combat, which was a huge bonus, meaning she could focus on the fight choreography for the film.

Audrey discovered stage combat four years ago after one of her friends asked her if she would do a Sword & Shield course with her. Audrey loved her first taste of stage combat and pursued it further, becoming an Advanced Actor Combatant. She trained in Unarmed, Rapier & Dagger, Knife, Sword & Shield, Quarterstaff, Rapier & Cloak, Broadsword and Swashbuckling.

Stage combat training is challenging as it requires a lot of self-discipline, is physically demanding and, obviously, accidents can happen. Luckily Audrey has never suffered any injuries apart from bruises. She was thrilled to use her combat training in the film:

“Despite the mud and the rain on set, I was so happy to be there and to finally do some sword fighting for the screen. I love stage combat, and I truly believe that every actor should find that little thing in acting that makes them feel like children again.”

The film was shot in Wales and, although the landscapes were beautiful, it rained almost every day on set. Audrey recalls when they were filming one of the most intense fight scenes in the woods and it rained all day. The costume designer, Robyn Manton, had to wrap the actors’ feet in cling film to keep them dry.

Giles Alderson directed ‘Arthur & Merlin: Knights of Camelot’, which follows the journey of King Arthur and his knights of the Round Table returning home from war and discovering that Camelot is in great danger as Modred has claimed the throne for himself. It is a story of power, betrayal, lust and revenge.

Since shooting the film, Audrey has continued to keep herself busy, even during the coronavirus lockdown in London. She has been part of the innovative Shakespeare series ‘The Show Must Go Online’, created and produced by Sarah Peachey and Robert Myles and broadcast on YouTube every Wednesday evening. She has also recorded an audiobook for Audible and finalised a short film script which should be filmed before the end of the year.