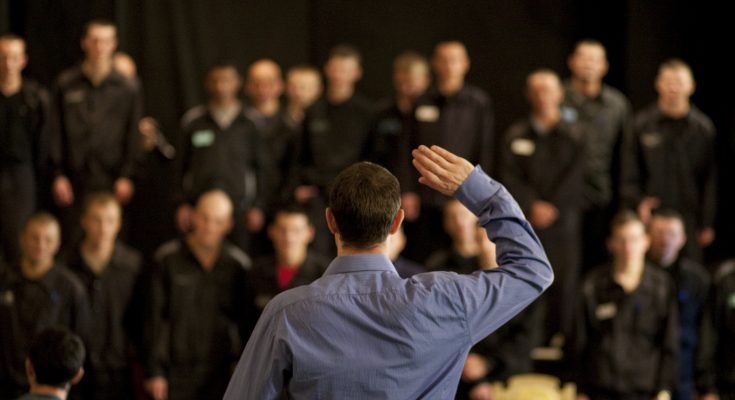 By Hollywood Stage MagazineComments Off on Power of Art: Prisoners gain early release because of acting training

Acting teacher Alex Dower helped to change the behaviour of prisoners in the UK and Russia with his training, which led to an early release of many.

Alex Dower, acting teacher and actor got this amazing idea because he came across a company working in prisons, liked the sound of that, went to audition for them and got the job – from his first ever audition. There are now many companies around the country working with prisoners doing theatre, including drama-therapists, teachers and directors, but Alex is the only person using the Science of Acting in this context. He has also been acclaimed for kick-starting a trend for theatre in prisons in Russia.

Alex explained that he enjoyed working in prisons because he felt he could make a big difference for people there, and it was satisfying because he saw great results for people, and because they have little else to do, the prisoners tend to be pretty focused and so you can get a lot done with them, and you find some great talent there.

Alex’s first experience was in a prison for sex-offenders – pedophiles in fact. On his first morning in a prison, he was talking with a guard who looked after the prison dogs whostarted telling Alex all about how, at some stage of training the dogs they masturbate them. This was was just as they were bringing the prisoners into the room.  “That was very weird,” says Alex, “then later, we were doing an improvisation and I was playing a character who was being arrested and when one of the prisoners – who was playing a policeman – asked for my address, I said “99 Benders Avenue”. It just came out of my mouth, I don’t know why. That was a crazy day – in at the deep end!”

Dower explained that one problem he had was that he tends to be very open and friendly and the prisoners would often open up to him, then at the end of the day he would leave and they would, of course, have to stay there.  He realised after a while he felt guilty about that. Alex was young and didn’t really have the emotional resources to deal with the impact of it all.  He was partying at the weekends and going into heavy prisons in the week, doing these intense improvised shows in places like Dartmoor Prison, Broadmoor & Ashworth Special Hospitals, Barlinnie in Glasgow, working with a full range of prisoners from confused, desperate young kids who were in for arson through drug-addicts and burglars to armed robbers, murderers, rapists and child-abusers.  “There is so much mistrust, manipulation, frustration, despair and humiliation going on, it was hard for me to navigate all that”.

Now it’s 25 years later and Alex is working with a different approach – using the Science of Acting. He doesn’t do it full-time, because he doesn’t want to spend so much time in that environment. But what he’s seen are incredible positive effects of this kind of work. He explains that during a project he led in a prison in Russia, most of the men had such a remarkable change in attitude & behaviour that the Governor gave half the cast early release. Recent reports he had after his work in Brixton Prison in London is that the men in his group had shown much less aggressive attitude & involvement in the conflict in the prison, were much more open & communicative, coming out of their cells more, themselves reporting being happier, having better relationships and  communication.

Prison is the perfect opportunity to help people turn their lives around, in all sorts of ways.  Practical, emotional, psychological.  The kind of work Alex and others do is critical to that.  But at the moment that opportunity is completely squandered, which is tragic.  People generally come out of prison much worse off: even more resentful, criminalised, alienated, depressed, than they were before, so the cycle of offending is perpetuated.  It shouldn’t be like that.  The incarceration itself is the punishment.  It’s for the good of us all if prisoners are helped. Not all of them will ‘reform’, but so much can be done to lead them away from lives of crime.  Alex says: “Will it change in the future? Honestly, I don’t know. Effective treatment of prisoners is always a luxury – the last priority – so probably it will improve only if society is wealthy and more equal, and has a change of perspective & values. And pretty soon, the way things are going with inequality, the wrong priorities and climate change, most of our resources are going to be spent on survival, warfare and combating the ravages of climate change, so I’m not optimistic”.

The next projects Alex has coming up are in the Netherlands, Kosovo, and working in villages in Ethiopia and Tanzania.